Where Christ Meets Us

You are the salt of the earth. But if the salt loses its saltiness, how can it be made salty again? (Matthew 5:13)

For where two or three are gathered in my name, I am there among them. (Matthew 18:20)

The latest post on Micah Bales’s blog,The Lamb’s War, has troubled me so much I’ve felt moved to write a response.  Micah regularly provokes readers to examine what is not alive in contemporary meetings and church communities.  I value reading his posts.  In Is Jesus “Religious”?, he contends that Jesus did not behave in a religious way, and that Jesus would be unlikely to attend contemporary worship services.  He wrote, “I have a tough time imagining our modern-day houses of worship as the site for Jesus’ prophetic witness. I think he’d want to be where the action is – in the lecture halls of universities; on Wall Street in corporate boardrooms; on the internet; maybe even in the halls of government! The last place I can imagine him showing up to make an impact would be at worship on Sunday morning.”

I agree that most meeting and church services have little of the saltiness Jesus wants to cultivate in his friends and followers.  Most are too acculturated to mainstream society to encourage members to listen to prophetic promptings.  Jesus criticized many of the religious observances of his day, and I believe that the living Spirit of Christ is critical of our lack of prophetic saltiness today.

I do believe, however, that Jesus was both spiritual and religious.  He often preached in the open air and in the homes of followers, yet from the age of twelve onward, he was known to spend time in the  temple in Jerusalem, which he called his father’s house.  He was angered that the Temple was used in ways that did not honor God, and it was important to him to observe Passover with his disciples, one of the most important religious observances of his faith community.  When he visited Nazareth, he attended the synagogue and read the Torah passage for that day.

The people of his hometown were enraged by the prophetic pronouncement Jesus made there, and they chased him out.  They could not accept that a man they had known as a child, a human being like them, could be filled with God’s Spirit in the way he claimed.  Many church-goers today treat the living Christ who visits their worship services in a similar way, chasing away the salty prophet and allowing only the compassionate companion to come close to them.

However, Christ is present anyway.

The Light of Christ fills all things and is present in all places.  The prophetic Spirit of Christ fiercely urges people to take action to make our world reveal that the Kingdom of God is among us.  Christ is not proud or arrogant, however, but loving, forgiving, patient, and persistent.  If people are not hearing a prophetic call in their worship services, it is not because Jesus has refused to attend, but because their ears are not open to hear.

To truly hear God’s prophetic call to action–as opposed to our own ideas about what God or Christ might want–we need to learn to hear the voice of the true shepherd and distinguish it from all the other inner and outer voices and motivations which call for our attention.  A faithful religious community helps members cultivate the ability to hear true spiritual guidance and helps us find the courage to follow it.

I have experienced God’s presence and guidance in many ways, both in the places Micah mentions, and also in many of the gatherings and practices of my religious community.  Some of my experiences have seemed, in particular, to be experiences of the Spirit of Christ.  This winter, for example, I received some clear guidance while attending my mother’s church.  During a moment of silence, I inwardly sensed Jesus asking me (not for the first time, but never before so clearly) to take up more discipline in a certain area of my life which had been in disorder.  This instruction was brief, but so clear, so loving, and so real.  Since then, I  have heeded that instruction, and it has been changing my life.

Years ago I took a month of mostly silent retreat in my mother’s house. During times of prayer, I kept seeing a particular image of Jesus.  In the larger painting from which the image comes, it is clear that his poignant expression is directed toward the devout rich young man who wants to know what else he needs to do to enter the Kingdom of Heaven.  Jesus invites him to give away everything he owns and become a follower. The young man, however, is too attached to his riches and to the comfort and status they confer.  The face of Jesus reveals no condemnation; he has a look of pure compassionate love.  It is the love that sees everything, a love that forgives, but a love that also calls us to let go of our attachments and enter a risky life of faithfulness and freedom of spirit.

During my month of retreat, I noticed that only one church in that small Virginia town had a woman pastor.  It was the most humble-looking church building in town, with aluminum siding instead of brick or stone walls.  I attended the worship service one Sunday morning.  I was graciously greeted. When I took a seat, I saw that I was the only person there who was not African American.  The cover page of the church program contained the image of Jesus that had been appearing to me.  Pastor Lucy preached an energetic sermon, and I felt the Spirit of Christ present there.  I also frequently experience the presence of Christ in the Spanish mass in that town; Latino families travel from all over the Shenandoah Valley to attend.

And this past weekend I visited a Catholic retreat center, home to more than 100 retired Franciscan nuns, many of whom served in schools for fifty years.  Most, suffering ailments associated with old age, clearly find spiritual support from the worship service.  After the priest performed the ritual of consecration, several sisters served communion.  I was sitting near one, a woman in a blue striped pant suit who lifted up a host for each person coming to the altar.   She had a beautiful, joyful smile on her face and looked lovingly into each person’s eyes.  I felt Christ’s presence.

Yes, Christ is present to comfort and support and guide in today’s worship services.  Does the prophetic call of Christ also reach people there?  During the coffee hour after the mass, one of the nuns said that since her retirement, she now finds joy by teaching GED classes in the local prison.

What about our Quaker meetings?

For many years before coming to Quakers, I had thought of myself as “spiritual but not religious.”  The first time I attended Newtown Square Meeting, I was greeted warmly outside the old stone meetinghouse.  It was a lovely fall day.  Only five or six attended that meeting for worship, several of them people who take time regularly for prayer, worship, and listening for divine guidance.  The small room, though paneled in wood up to the windows, seemed very plain.  In spite of a ticking clock, the stillness was deep.  A thought came to me strongly and clearly: This is like the place where Jesus taught his disciples.  I felt that I would be taught by Christ in that place, and within a few months, I felt led to join that meeting.  I was deeply shaped by participating in that close religious community and learned how to participate in the communal practices that Quakers use to help people hear and faithfully respond to divine promptings.

In meetings for worship held in that meetinghouse, over time, I experienced Christ calling me to move to the inner city of North Philadelphia, calling me to join a small Quaker “ministry of presence” in a neighborhood known for poverty and the drug trade.  After months of struggle with this call, I obeyed, and walked through a veil of fear to the other side.  My housemates and I worked with our neighbors to reclaim the local park and make it a safe place for children to play.  We went to City Hall to advocate for new playground equipment.  During the years I lived in that neighborhood, I felt the Spirit of Christ inhabiting my body in a new way.

Perhaps my “largest” experience of the presence of Christ came during the annual sessions of my yearly meeting, held in the Arch Street Meetinghouse in Philadelphia.  Days earlier, NATO had begun bombing Kosovo, in an attempt to stop genocide.  In a room filled with hundreds of Friends, there was deep concern about this.  I felt as through the entire enormous room was filled with the presence of God.  In the gathered silence, it was inwardly opened to my understanding that Christ was present as God’s compassionate heart.  I felt a call to us in that gathered silence.  Within days, some of us began a prayer vigil for peace in the world.   For an hour every Sunday afternoon, we stood in front of the Liberty Bell giving public witness that God calls us to address conflict nonviolently.  That vigil continued every Sunday for more than ten years.  Tourists from all over the world took photos and videos, which they brought home to their countries, evidence that some U.S. citizens oppose war and militarism.

The Jesus I have met in worship services all over this country called me into the barrio, into the offices of our city councilman, and onto the streets.  In prayer and worship, I have also heard Jesus call me to sit alone at a desk and computer, to write about the Quaker way to live a life of faith.  I believe I am called to a prophetic task in this, as well.

Being part of a faith community has always been essential grounding for the faithful life, and the prophetic life.

Where Christ Meets Us: Have you met Jesus in meetings for worship or worship services of your church?  Has participation in a religious community helped you life a faithful life, or has it hindered you? Where have you been taught or guided in a way that seemed prophetic?  Have you heard Spirit-led prophetic ministry in your meeting?  Have you encountered God or Christ in a way that led you to prophetic witness or action?

A Whole Heart has pages on Articles & Interviews, Videos, Upcoming Workshops, and Bibliography. 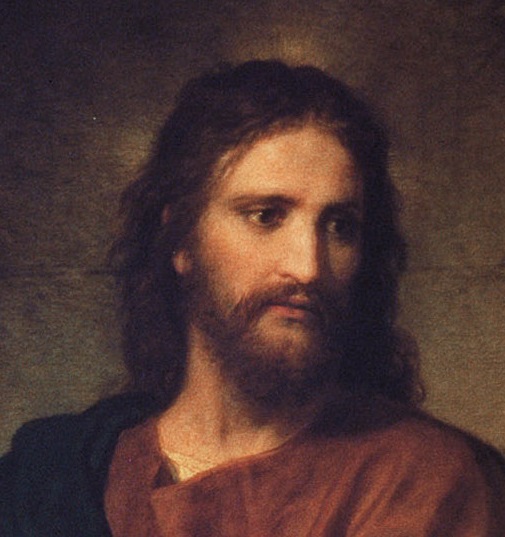 Detail from Heinrich Hofman’s Christ and the Rich Young Ruler 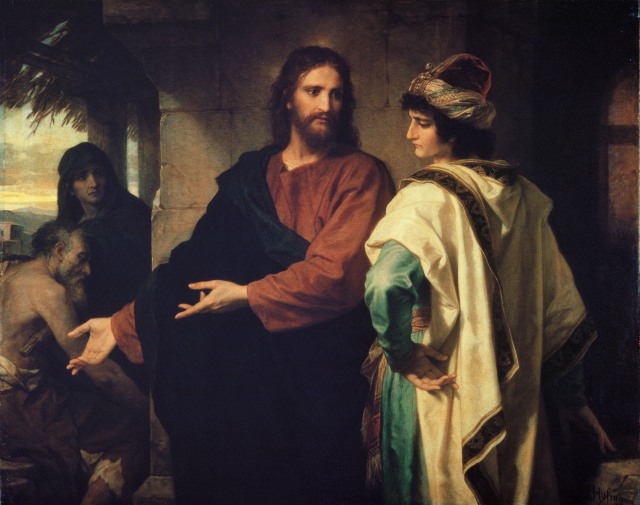 16 Responses to Where Christ Meets Us