Posted on September 7, 2015 by friendmarcelle

This week a stranger stayed with us for two nights along her way from New England to Georgia. Sheila Garrett, a member of Putney Friends Meeting in Vermont, is acting on her leading to walk from New England to the November 20-22, 2015 SOA vigil at the gates of Fort Benning, Georgia.  She plans to participate in the annual protest of what used to be called The U.S. Army School of the Americas, a training program in “counter-insurgency” nicknamed by protestors “The School of Assassins.” She is staying with friends and strangers along her route who offer hospitality for a night or two. When I received an email that this unknown Friend was nearing Philadelphia, I emailed an invitation to stay with us. 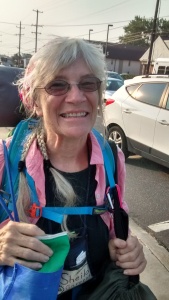 After leaving Philadelphia, Sheila stayed two nights at Pendle Hill retreat center.   There we heard her talk informally about her journey. She touched on various aspects, from logistics, to footwear, to her spiritual leading. We learned, for instance, that in this warm weather Sheila is walking in rubber sandals, with socks. In her pack she also carries a good pair of walking shoes, but she has mailed her hiking boots ahead to Georgia. Like other long-distance hikers, she’s eager to lighten her load. In the past she has participated in walks organized by Native Americans, Buddhists, and others. The longest she has ever walked is three weeks. Now she plans to spend three and a half months walking to Georgia.

On her blog, Sheila writes that she walks for many reasons: “I hope to visit with people whose lives are impacted by the choices our government makes, to think together about ways we can effect change.  I am grateful for support of all sorts but my hope is to be self-sufficient whenever possible and necessary.  Above all, I want to be of service, not a burden to those I visit and engage with people in a way that is meaningful to us a 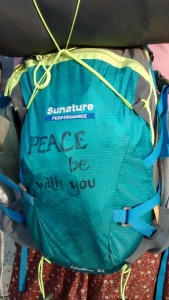 ll. When away from home I feel blessed to meet people in their own home environment and find that many are eager to offer whatever help they can. I wear a vest or a hat that carries the message ‘Peace be With You.’  It is offered as a blessing and an invitation, if anyone chooses, to talk about what peace is to each of us and the challenges faced in life. Another reason to walk is health. It allows me to stay strong and flexible.  Being outdoors and moving, even in all sorts of weather, is a constant joy.” Sheila hopes to visit as many places of worship as possible, and would love to arrange gatherings of interested people to “share a meal and talk about the social justice and peace issues in the local community.”

The first School of the Americas protest was in 1983, when Catholic priest Roy Bourgeois and two companions entered Ft. Benning military base. They climbed a tree and broadcast the final homily given by Oscar Romero, Archbishop of San Salvador, who was known for speaking against injustice, poverty, torture, and assassination. Romero had been murdered by SOA graduates while saying Mass. His sermon was broadcast in Spanish after lights out, to a group of Latin American military personnel housed in the barracks in Fort Benning:

Brothers, each one of you is one of us. We are the same people. The peasants you kill are your own brothers and sisters. When you hear the voice of a man commanding you to kill, remember instead the voice of God: THOU SHALL NOT KILL!

Father Bourgeois was sentenced to 18 months in prison. (For a vivid account of that first nonviolent protest action, click HERE.)

In 1989, SOA graduates in El Salvador murdered six Jesuit priests, their housekeeper, and her teenage daughter. That’s when Father Bourgeois began the annual protest. During the decades since, people have come from all over the country to protest and participate in the vigil outside the gates of Fort Benning. 22,000 people participated in 2006. In 2000, in response to increasing public outrage at the violence engendered by SOA throughout South America, Congress voted to stop funding the School of the Americas. However, with very minor changes, the school was quickly reopened under a different name, abbreviated WHINSEC. There the U.S. Department of Defense still trains military officers and police from South America. Numerous graduates are associated with oppressive military regimes and have been linked to massacres, murders, torture, intimidation, and assassination. (Click here for more the SOA Watch website which contains more information.)

Participants in the annual SOA vigil carry small white crosses, each with the name of a different person murdered by a graduate of SOA/WHINSEC. During a ceremony that Sheila found very moving, each of the thousands of names is spoken out loud and the group responds with the Spanish word, “Presente,” which means “here” or “present.” Each year, some of the protestors walk onto the grounds of the military base carrying crosses, thereby committing civil disobedience. To date 245 different people have gone to prison as a consequence of their nonviolent protest. (For photos, click here: Sisters of Providence at SOA Watch vigil.)

Sheila arrived at our house on a hot afternoon. She was a very pleasant and easy guest. We served spaghetti for dinner, and she told us it had been her favorite meal since childhood. In the evening she spent time writing and sending out her next blog post. With decades of experience living simply, she is still learning how to use electronic communications. Earlier in her life, while raising her son, she and her former husband lived “off the grid” in rural Maine, growing their own food and heating mostly through their wood stove. More recently, she was a teacher at the Meeting School in New Hampshire, a residential Quaker school that ran an organic farm. 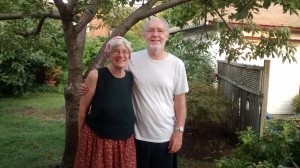 While Sheila stayed with us, we took advantage of her extensive knowledge of plants and gardening. She helped us prune and weed in our back yard, giving us lots of information about how we could care for our flowering trees and bushes, how we could grow lettuce and other greens this fall, and how to improve our soil with compost and ground cover plants. She gave very generously of her time, labor, and knowledge.

Early on the second morning, I walked with Sheila for the first mile of her route, along a busy road. The mile seemed shorter than I expected. Before leaving home, I had checked a map online to see if we could take a back way, but the route had seemed too complicated, so we walked the main road. After watching Sheila continue on without me, however, I suddenly felt inspired to try the back route. It turned out to be a bit of an adventure: some of the curving little “roads” I had seen on the map were in fact the parking lots around apartment complexes. By the time I arrived home, however, I was quite pleased to have discovered a new walking route in my own neighborhood, another unexpected gift from Sheila’s visit. 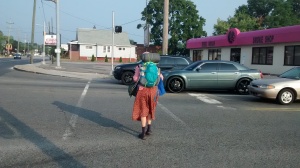 Sheila Garrett has mapped out a route for her walk, which began in Connecticut. After leaving our home in Chester, PA, she walked 10 miles west to Willistown, PA. She wrote me later that she enjoyed her walk, even though she needed to exercise special care where the road had no shoulders. She was able to rest in the shade of a Quaker meetinghouse along her way, and some people passing her on the road stopped to offer bottles of water. On Sunday she attended Goshen Meeting with her weekend hostess, then walked west to Kendal, a Quaker retirement community. She had been looking forward to meeting one of the residents, who had participated long ago in Koinonia Farm, a long-time n inter-racial Christian community in Georgia, which she hopes also to visit. Now Sheila is heading toward Maryland and will pass through or near Aberdeen, Baltimore, Columbia, Rockville and Bethesda. Then she plans to walk through Virginia (Arlington, Culpepper, Ruckersville, Charlottesville, Lynchburg, Chatham.) After crossing into North Carolina she will head for Greensboro and Charlotte. In South Carolina her route turns west toward Atlanta, Georgia, and then south to Columbus, GA, home of Fort Benning.

Sheila doesn’t yet know where she will stay most nights. She trusts, hoping that people who live along her route will contact her and offer her a meal and a bed for the night. In return, she is willing to do gardening and yard work (as she did at our house), or another chore. If you know someone who might be open to hosting her, please forward this blog post.

Sheila was a stranger when I read that she was walking toward Philadelphia. She left our house as a friend. To read her blog, on which she posts accounts of her adventures, or to offer her a place to stay for the night, go to the Putney Friends Meeting website.

A Contemporary Peace Pilgrimage: When have you offered hospitality to a stranger? What challenges and what gifts came with that? Did it change you in any way? Have you ever felt God leading you to participate in a vigil, a protest, or other kind of witness?

Below is a YouTube video with clips from the 2010 SOA Watch vigil.  It includes a prayer by Roy Bourgeois, a bit of the roll call of names, funeral images, and photos of people carrying crosses and inserting them into the chain link fence around Fort Benning.  It features two songs, including “One by One,” by Emma’s Revolution, written for the occasion.   https://www.youtube.com/watch?v=jJv0LZbOkw0

3 Responses to A Contemporary Peace Pilgrimage