The Fruit of Long Labor

At the age of five I wrote my first story, on the back of used computer paper my father brought home. By the time I was six, I felt certain I had been born to write books. In the fifty years since then, I’ve been frustrated and impatient with myself for not having published a book yet. The novel I finished just after I finished graduate school was returned by many agents and publishers with the words, “If you write something more mainstream, send it to us.”

By age twenty-seven, I knew I wasn’t born to write books that conformed to society’s norms and notions; I was ambitious to write something that would make the world a better place. I’d had a powerful spiritual awakening that made me understand life in a whole new way. I passionately wanted to share the truth I’d discovered about the divine reality within us all, present here and now. In love with this amazing truth, I no longer wanted to write fiction. Instead, I wrote hundreds of pages about my own experience. I didn’t feel my story was ready for publication, however.  I did not understand exactly what was happening to me or why, and I also sensed that the real story wasn’t just about me.  I knew others were awakening to a powerful, sacred dimension of life, and I wondered what we were collectively being called to.  I sensed that the growing crises of our time, especially environmental destruction, would require something new of humanity.

I had been reading the Bible and searching the libraries for accounts of other people’s spiritual experiences throughout history, direct experiences of God and Christ and the Light within. Stories have always been more compelling to me than ideas and doctrines. I needed to know about people’s actual experience and the lives they lived as a result. I discovered that, in the past, most women with the kinds of experiences I’d been given had been sent to convents or monasteries, at least those about whom books were available. However, it was clear to me that the God I had encountered was sending me into the world, not out of it. In face, I was led to move from the beautiful rolling hills of Western Massachusetts to the inner city of Philadelphia.

I visited different churches and spiritual groups, needing a community that could support people seeking to be faithful to a call from God. The first time I attended a local Quaker Meeting, I found a biography of George Fox in the library. I read about his spiritual experience, his radical message about the Light of Christ within, and about the passionate Quaker community that formed in his time and witnessed for a different way of life. I became a regular attender at Lansdowne Meeting. Friends there welcomed me, and I was nurtured by many of the meeting’s elders. I took classes and workshops at nearby Pendle Hill retreat center, and I learned by experience how the corporate spiritual practices of Quakerism can support a life dedicated to faithfulness.

Some of the elders I respected lamented that Quakerism today did not have the same vibrant power known by the first Quakers. Starting with the Journal of George Fox, I began reading seventeenth-century Quakers’ accounts of their Spirit-filled movement, wondering what it was about their spiritual journey that was so transforming and empowering. For seven years I lived alone for two months every summer in an old stone farmhouse beside Amish neighbors, months dedicated to research and writing. The house had been lived in by generations of history teachers, and the walls on every floor were covered with history books. I read about the turbulent times and fervent climate of religious seeking out of which Quakerism arose in England. In meeting libraries, college collections, and anthologies of early Quaker writing, I sought out their stories, seeking especially to learn about important Friends who are not well known in our time.

I was deeply moved by the willingness of some early Friends to travel for long periods away from home. Many suffered and some died to bring their liberating message to those who were spiritually hungry. I was amazed to discover how quickly the first Quakers began traveling to the colonies. I learned how their courageous and prophetic witness laid a foundation for religious freedom in colony after colony. In high school I had been a passionate student of American history, but had never been told about the important contribution made by early Friends.

For years I worked on my own account of the beginnings of Quakerism, telling the story of a network of bold, inspired people supporting one another in courageous faithfulness. Before that book was finished, however, another, shorter book was born from it, a book about ten elements of the Quaker spiritual journey, as experienced by early Friends and by Quakers in our time. Early in 2013 I began sharing first drafts of some of my writing about these elements in this blog, A Whole Heart. After writing about early Friends, I researched how Friends in our time have been inspired and empowered by God, Christ, the inward Light, and communal Quaker faith and practice.

I spent three years living in Richmond, Indiana researching and writing my book about the Quaker spiritual journey. As the Mullen Writing Fellow at Earlham School of Religion in 2013, I received helpful and encouraging support and feedback from professors and students. Shortly before I returned to the Philadelphia area, a Quaker publisher in San Francisco, Charles Martin of Inner Light Books, expressed interest in publishing my book. We have been working together, mostly via email, since last July.

In the past six months my dream of publishing a book that would nurture the spiritual life of others has felt so close to fruition–and at the same time still so far from reality. My husband, Terry, is my first editor, best proofreader, and the biggest source of support and encouragement. Nonetheless, he became tired of hearing me say, “The book is almost finished!”

“I’ll believe it when I’m holding it in my hands,” he said.

Months were spent getting permissions, checking citations at the Swarthmore Friends Historical Library, revising endnotes, working with a copyeditor, revising the endnotes again, proofreading, waiting. When Charles sent me a pdf of the front and back cover, I knew what the book would look like. But it was still felt like just a dream.

Tuesday afternoon this week I came home with my friend Angi. We were both surprised to see a stack of boxes on my doorstep. I couldn’t remember having ordered anything. The return label said, “Inner Light Books.”

Inside the boxes, I found the fruit of long labor. Now I could finally hold the book whose cover I had seen months before, Our Life is Love: the Quaker Spiritual Journey. I’m glad Angi was with me and eager to read the book. Fruit becomes fruitful when people are nourished by it. It was wonderful to put a copy into her hands. 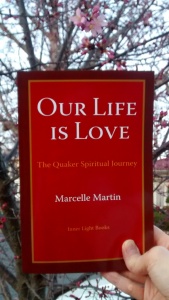 The book arrived the day the cherry tree bloomed.

You can order Our Life is Love from Inner Light Books. It’s available in hardback, paperback, and ebook.

The book was designed to be a resource for both individuals and groups to explore their own experiences of the ten elements of the Quaker spiritual journey. QuakerBooks provides discounts for books ordered in quantity.

On the weekend of April 8-10, 2016, Pendle Hill is hosting a workshop on Our Life is Love. We will explore how the ten elements relate to our own spiritual journeys and encourage one another to go for passion in our relationship to God, Christ, and the Light within. 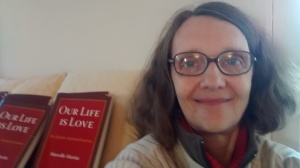 So happy the book is finally here!

11 Responses to The Fruit of Long Labor