Posted on December 17, 2014 by friendmarcelle

Give thanks in all circumstances…  (1 Thessalonians 5)

During a long, stressful move from Indiana to a new home in Pennsylvania, I had a beautiful experience of whole-hearted prayer.  With help from my fiancé, Terry, and several friends, I had been packing my possessions for weeks, creating a huge stack of boxes, bookcases, tables, desks, etc.  On a cold, but thankfully dry Sunday morning in early December, two of Terry’s brothers, Dan and Bernie, arrived in a pick-up truck pulling a (clean) horse trailer.  Some Quaker friends came to help load, along with a strong young man whose help had been solicited on Craigslist by a friend too far away to help in person.  It took a couple hours to squeeze everything into the truck and trailer and strap tarps over it.  The brothers’ non-stop funny banter entertained everyone.  The plastic recycling barrel on top of the load rode high in the pick-up truck.  Dan and Bernie joked that they’d let us know where it landed, so we could pick it up when we followed in a car two days later.  They had already driven for five hours that day, but were eager to get back home, so they left after a quick lunch, hoping to do the return drive in as much daylight as possible.

For the next six hours, Terry and I waited, praying for the safety of the two brothers, the truck and trailer, and everybody on the road around them.  I was touched by the brotherly love that led them to undertake the difficult task of moving me and my many books and other possessions.  I was moved by all the friends in Indiana who had helped, and by those who had put on a lovely event to say farewell to me and Terry, and to celebrate our intention to get married in the spring.  Being in need of help is humbling, and the help and love and gifts and good wishes of so many people left me feeling tender.  In the hours of waiting, that feeling of tenderness increased.  Finally, at 9:30 pm, Dan called to say that they had completed the journey safely, and that truck and trailer were now waiting in his barn for the second stage of the move.  The old tarp had been shredded by the wind, but the barrel was still attached.

That night Terry and I prayed in gratitude.  I was so thankful for the help we had received from the brothers and many friends, not only this fall but during my many previous moves.  I was grateful to all the kind people in Richmond, Indiana who had helped me to be at home there for three beautiful years.  I was thankful for the many people who had made possible our new home in Pennsylvania.  I felt gratitude pouring out of my heart, like light out of a bright window, reaching toward all who had offered their kindness and help.

“This is what it feels like to be whole-hearted,” I told myself.  The whole-heartedness issued not only from gratitude, but also from an awareness of my vulnerable dependence on the goodness of God and other people.  I felt blessedly connected with everyone and everything.

Two days later, heading toward our new home in Pennsylvania, Terry and I stopped halfway at Dan’s farm.  Terry purchased a new tarp and took the recycling barrel off the truck.  I tried to close up the gaps between tarps in the open windows of the horse trailer, not confident that the second weekend of the move would be as dry as the first had been.  Rain was predicted.

The brothers tried to avoid driving in the rain the following weekend, but because they both had to be at work on Monday morning and they didn’t feel able to do the second leg of the trip all in one day, they set out on Saturday in spite of fog and rain with a heavy load.  They had not approved of the quantity of books that I own.  While struggling to fit my bicycle into the already full trailer, Bernie had joked about me.

“She better be reading a book and riding her bike the next time I see her!” he told Terry.

In the minutes before they were due to arrive at our new home, Terry handed me a book to read.  We sat in the front window, watching for them and looking at our books.  My book was about prayer.  I read about how gratitude the most fundamental kind of prayer.  I remembered the gratitude that had poured out of my heart like light.  I prepared myself to accept with equanimity whatever happened next.  By phone we’d learned that the truck and trailer had been traveling in the rain for hours.

In the living room we had put down cloths to minimize the water and mud on floors we had just washed and oiled.  Then boxes and furniture were brought in, most of them dripping wet.  A few things that were too soaked to bring into the house went into the garage.  I was moved by the kindness of Terry’s family members and the friends who showed up to help unload the truck and trailer in the rain.   When everything was inside, Dan began to open up some of the wettest boxes and spread out soggy papers and books, to dry them out.  It was humbling to see my things strewn around; I knew I had not really needed to keep and move all of it.  The twin mattress that had ridden at the top of the pile in the horse trailer was too wet for anyone to sleep on, so we put down foam pads for one of the brothers to sleep on that night.  They bantered with each other about which one would get the dry guest bed.

I had a choice.  I could focus on my fatigue and aching muscles, the wet piles of my possessions, my embarrassment, and the books that would have crinkled pages after they dried.  I could be sad.  Or I could focus on being grateful for the kindness of those who helped us, especially the two brothers who had done so much work.  By grace, gratitude won.  We went out to dinner and had a good time.   The next morning Dan and Bernie were not content with all they had already done to help us; instead they drove us to several places, including Goodwill thrift store, to get a used sofa and other things we wanted.  Before heading off for another five hour drive, they also carried furniture and boxes upstairs, hung a Christmas wreath on the front door, gave suggestions for decorating, and offered helpful advice on what needed attention or repair.

When they were gone, Terry and I sat on our sofa, delighted by how nicely it matches the rug a friend had given us.  It was as though a divine decorator had planned it all for us.  We gave thanks to God. 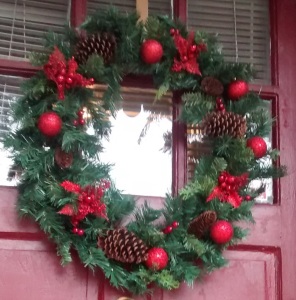 Prayer of Gratitude: Has awareness of your need for the help of God and other people ever helped you to feel more grateful?  What causes your heart to overflow with gratitude?

4 Responses to Prayer of Gratitude