One Second of Silence

We, the people of the USA, are in a state of grief and confusion — even those of us who are not gay, transgender, Latina, or Muslim, even those who don’t live in Florida and haven’t lost a family member to gun violence.  The tragedy in Orlando affects us all. The news reports and social media are full of opinions about what happened and why.  I hesitate to enter the conversation, but a phrase has repeated itself in my mind: “One second of silence.”  I feel drawn to look more deeply, and to reflect on causes.  And I feel called to enter into the vulnerable openness to God which is ultimately the only place of safety.

I first heard news of the tragedy last Sunday morning at Meeting when someone requested prayers.  Afterwards, my husband, Terry, and I bought newspapers, went online, listened to the radio.  Each day we learned more about the horrible murders in an LGBTQ nightclub in Orlando, Florida.  We also attended local gatherings, to grieve and pray.

On the day after the shooting, my husband, Terry, along with many members of my Quaker Meeting, attended an interfaith service held in a local church.  It included singing, prayers, and readings from the Bible and the Koran about being peaceable.  There was a time of silence. He and the man sitting beside him were moved to tears.

The next night we attended a meeting for prayer and worship held at Pendle Hill retreat center, convened in response to a request from Orlando Friends Meeting.  They had asked Quakers everywhere to gather that night and join in prayer for them and for everyone in Orlando needing strength and solace.  At that meeting, we heard expressions of grief and broken-heartedness.  Someone told about five decades of struggle for gay rights and mourned that the killer could find no better way to deal with confusion about his own sexuality.  We heard the voice of a Muslim woman, also broken-hearted, who said that true Islam is a religion of peace and love, not of violence.

I remembered visiting Florida Friends in Orlando meetinghouse, and in the silence of our gathering, I sensed that we were woven together spiritually in a large network of Quakers and others who were praying.  I felt how the tragedy had opened a wound in the collective heart of our nation, or even our planet.  This wound made us feel vulnerable, and at the same time it was an inner place of connection.

On the third day, Terry and I participated in a vigil held outside the courthouse in Media, Pennsylvania.  Many people attended.  We were gay, straight, and transgender.  Forty-nine volunteers lay down on the grass to symbolize the bodies of the forty-nine people killed at Pulse nightclub on Sunday.  It was a sobering sight.  The names and ages of the dead were read aloud; some were still in their teens.  A rabbi, along with many others, recited a Jewish prayer, in Hebrew.  It felt sacred.  A Methodist minister offered another prayer, then raised a large rainbow-colored kite, as a symbol of hope.  We were invited to join in forty-nine seconds of silence, one second for each of the victims.  I felt a holy hush.  Afterwards, the forty-nine volunteers stood up and a local group advocating for sensible gun control addressed the crowd.  Coming together in public with others and sharing our grief and prayer had a healing effect, bonding strangers into community.

“Fifty people died that night,” my husband said as we walked away.

It’s worth devoting at least one second of silence for the killer.  First, because he, too, was a child of God, as everybody is.  Next, because looking closely at his life could lead to some insight about the causes of this particular tragedy.  What was tormenting him, and what encouraged his violent tendencies?  Omar Mateen was an American citizen, born in this country to parents from Afghanistan.  He was troubled from childhood.  He abused his first wife, who left the marriage after a short time.  Wanting to be a police officer, he entered a training program in the Florida Department of Corrections.  He was dismissed, however, after making a joke about bringing a gun to class.  He took a job as an armed guard and was known to become enraged when he felt disrespected.  How often do Muslims in this country feel threatened and disrespected?  At various times, Mateen expressed allegiance to different Islamic groups that are in opposition to each other.  This suggests he knew little about them, but nonetheless he felt a kinship.  Although twice investigated by the F.B.I., he had no trouble buying a semi-automatic assault-style rifle and a huge quantity of bullets.  What prompts a young man to the path of terrorism, at the cost of his own life?

I feel called into the silence, to look more deeply at the causes of the violence in Orlando.

We live in a human world of gross inequities. Some people control far more than their fair share of the world’s resources, while many others have less than they need, an injustice that leads to conflict among individuals, classes, groups, and nations.  Those who are different from the mainstream are often demonized, their beliefs and cultures denigrated.

Human beings have a natural aversion to murdering one another. In all past U.S. wars, a large percentage of soldiers never fired a single bullet.  Today the United States as a whole craves dominance and glorifies violence and weaponry.  Television programs and movies acclimate viewers to watching numerous murders, at high speeds.  Certain video games were designed by the U.S. military to train soldiers to overcome their innate resistance to murdering another human being.  Today many children are addicted to this kind of video games in which they shoot and kill as fast as possible.   Hitting targets, whether on videos or on the shooting range, is a way to cope with insecurity and fear; it gives a temporary illusion of being in control, of being safe.  But ultimately watching images of violence and practicing murdering others strengthens the fear that enemies are out to get us.

The root cause of violence among us goes even deeper.  We are so focused on the material world that we do not trust in non-material realities.  We fear death because we are ignorant of the spiritual nature of our true being.  Changing a culture that perpetuates fear, discrimination, and injustice requires us to look more steadily at the Great Love that holds us all.  At the deepest level of our being, we are all one, united in God in ways that are not visible to the outer eye.  To increase consciousness of this underlying unity, we need to look at all the things within us that block our awareness.  We must open our hearts in ways that make us feel vulnerable. Only by entering into undefended open­ness can we feel our connection with everything and everybody, and know our place in the Eternal Reality that is our ultimate and only true safety.

For more than one second. 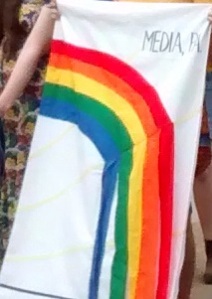 One Second of Silence: How do you experience the conflict between love and fear, peace and violence within  yourself?  Do you make time in silence to look within?  Have you found the peace of the divine Presence?

Our Life is Love: the Quaker Spiritual Journey, by Marcelle Martin, is available from Inner Light Books in hardback, paperback, and ebook.  The book was designed to be a resource for both individuals and groups to explore their own experiences of the ten elements of the Quaker spiritual journey. QuakerBooks provides discounts for books ordered in quantity.

3 Responses to One Second of Silence