Posted on August 8, 2018 by friendmarcelle

The first tree that beckoned me, long ago, was a sapling on the far side of my grandmother’s lawn. Sensing that it was silently calling me, I went to investigate and discovered that it was being strangled by an orange plastic band encircling its trunk. The sapling had probably been purchased at a local nursery, with a label and price tag attached to the band. My grandmother had neglected to remove it. The trunk of the tree, now grown, was being choked by the now tight plastic ring. When I cut it off, I may have merely imagined the tree’s relief. I felt certain, however, that the tree had been sending out a signal of distress, which I had somehow sensed.

About a year ago, another tree called to me. It was much older and the call was different kind of call. I was nearly home from my morning walk. One block ahead of me, on the edge of the local park, a large, beautiful tree I had never noticed before drew me toward it. During my walk I’d been praying about a conversation that was scheduled soon. With others, I was planning a new program and had been encouraged to let myself “think outside the box.” I wanted to be faithful and really hear what God’s plan might be.

The tree invited me to come near. I left the heat of that late August morning and entered into its welcoming shade. The trunk split into many tall, gracefully curved branches, their shiny green leaves high over my head and all around me.

I leaned back against the trunk and imagined roots deep in the ground.  I resumed my prayer for guidance and divine inspiration. As I rested against the tree, a new idea came, something “outside the box,” along with a surge of energy and excitement. I brought this new possibility into the conversation I had soon after, and it grew into something wonderful. It felt like a gift–not from the tree, exactly, but received because I had connected with the tree that way.

In the months that followed, I felt invited to become well acquainted with the tree, its graceful spreading canopy, its dark oval leaves edged with tiny serrations, the bark grey-brown and ridged.

Friends more knowledgeable than I have identified it as an American Elm. I noticed that the roots had thrown up a couple of old paving stones; it had outgrown once tidy borders. It had likely been planted nearly a hundred years ago, at the edge of a park established on what had been a Quaker farm, not far from where William Penn landed in 1682, in what had then been a mostly Swedish settlement. The land on which the tree was growing, near Ridley Creek, had long been inhabited by the Ockehocking Tribe.

Again and again, at many different times of day, and during different seasons, I’ve returned to that beautiful tree; it lives less than two blocks from me. 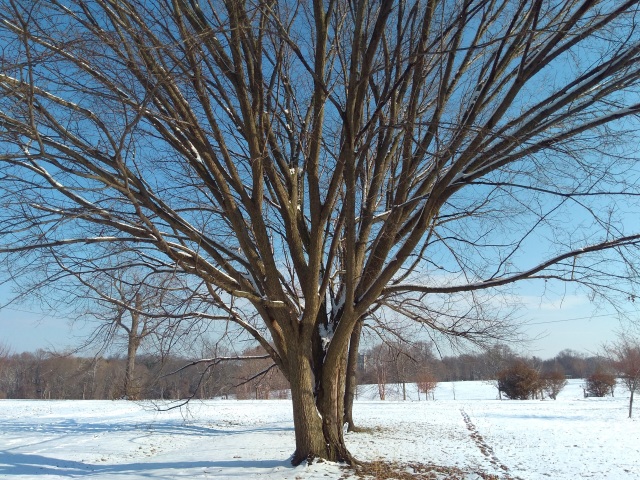 Gradually I realized that unconsciously I have been thinking of myself as somehow bigger, more important than the tree. It has taken a while to notice my human prejudices. The issue of size is indisputable. Physically, the tree is immensely larger than I. When I lean against the trunk and look up into its branches, they rise perhaps sixty or seventy feet over my head, with a span more than half that wide.

Slowly, I have recognized my prejudice that I, a human being, am worth more than a tree. I now question this view.

I discovered another blind spot when I invited my husband to come meet “my” tree. My beautiful Elm stands beside another tree that is taller. The neighbor is farther into the park and gets more sun.

“It has a friend!” my husband exclaimed, when he saw the two trees side by side.

Suddenly I recognized that I had been viewing the other tree as a rival for the sun. His comment enabled me to see that, in fact, the two are companions. They help shelter each other from the wind, and, no doubt, their roots are intertwined. Soon after, I looked around and realized that the pair are part of a whole community of trees, a community that knows no borders and includes not only trees in the park but also the ones on the nearby streets, including a towering Sycamore a block away.

I know I have a lot more to learn from these living trees. They are more than beautiful. They purify the air and provide oxygen that my neighbors and I breathe. Surely they also give many more gifts.

I wonder, will I also discover that this large, beautiful tree not only invited me to learn from it, but also, like the little sapling on my grandmother’s lawn, called to me because it is in distress? This community of trees is no doubt disturbed–and in the long term endangered–by urban sprawl, toxins, and climate change.

I look forward to what else I will learn from being in relationship with living trees.

September 8, 2018 is a global Day of Action demanding real climate leadership.  Rise for Climate is planning thousands of rallies in cities and towns around the world to demand that local leaders everywhere put life, people and justice ahead of profits for the fossil fuel industry.  Click HERE to find a Rise for Climate, Jobs and Justice rally near you.   Reversing climate change is the biggest right-to-life issue on the planet.

Our Life is Love: the Quaker Spiritual Journey, by Marcelle Martin, is available from Inner Light Books in hardback, paperback, and ebook. An excerpt and a study guide are also available on that website. Reviewed by Friends Journal, the book was designed to be a resource for both individuals and groups to explore their own experiences of ten elements of the Quaker spiritual journey of faithfulness.

A Quaker writer, teacher, workshop leader, and spiritual director, I've traveled widely to facilitate workshops and retreats about the spiritual journey. I'm the author of Our Life is Love: The Quaker Spiritual Journey, and A Guide to Faithfulness Groups.
View all posts by friendmarcelle →
This entry was posted in All of Life is Sacred, Stories that Heal and tagged communication with trees, community of trees, human prejudices, living trees. Bookmark the permalink.

24 Responses to Beckoned by Trees