Red Alert for the Earth

Posted on September 5, 2018 by friendmarcelle

Divine light shines in us all and sustains Creation, as well. But we have lost connection with this fundamental reality, and western civilization has dominated our environment in a way that is catastrophically altering our climate and threatening the survival of our species (and many other species, as well).

About a decade ago I learned that climate change would be slow until the oceans and forests absorbed as much atmospheric carbon as they could.  After full saturation, the rate of climate change would accelerate alarmingly. As the temperatures rise, forests burn and glaciers melt, releasing carbon that was previously kept out of the atmosphere, causing even hotter temperatures. The melting of glaciers and polar caps causes the ocean levels to rise, threatening to drown island nations and coastal cities. Weather patterns are changing, bringing drought to some areas and excess water to others, causing more and more people to become refugees.

Photo by Nathan Cowley on Pexels.com

In 1962 the publication of Rachel Carson’s book Silent Spring, focusing on pesticide use, signaled a yellow alert about environmental problems caused by humans and identified the denial of those problems by vested business interests. She warned of the dangers of not halting the destruction of our natural ecology. In 1988 NASA climate scientist James Hansen issued a more serious warning–an orange alert—when he testified before Congress that climate change was indeed happening and that it was the result of human behavior. He predicted three scenarios of possible changes, depending upon the level of emissions. In June 2018 he reported that we are close to his predictions for scenario “B,” with a global rise in temperatures of 1.8 degrees in the past thirty years. During that time, annual emissions have risen from 20bn tons of carbon dioxide in 1988 to 32bn tons in 2017.

Collectively, our culture has not heeded the early warnings. Because climate change has been very slow for decades, we have been able to ignore and deny it for a long time. Now that the change is accelerating, some are paying more attention, but those with vested business interests are still denying that the change has human causes and are even rolling back regulations intended to limit our emissions.

In the meantime, sixteen of the seventeen hottest years on record have been since 2001. This summer’s out-of control wildfires have been more intense than usual and have even been burning around the Arctic Circle.  In July the temperature in Ouargla, Algeria rose to 124.3 degrees, the hottest temperature ever recorded in Africa.

Photo by Pixabay on Pexels.com

Our situation now is the equivalent of a Red Alert: extreme danger.

It is absolutely urgent that we curb the way we burn fossil fuels for our transportation, business, food production, and energy use. Every person, every company, every town and every nation has a part to play in changing the way we live.  This is a right-to-life issue of incredible magnitude.  If we don’t reverse climate change, then the lives of future generations of human beings are in terrible peril.

Recently I participated in a Quaker climate encampment on an organic farm in New Hampshire. A group of Friends in New England, deeply concerned by the dangers of climate change, have been listening together for how God may be leading them to take prophetic action. Last summer they participated in a climate march in New Hampshire from Schiller Station (a biomass and coal plant) to Merrimack Station (the only coal-fired power plant left in New England without a shut-down date). This July, they mourned at the gates of the Salem Methane Power Plant in Massachusetts. At the encampment in August, the group considered how to address the spiritual and cultural forces that perpetuate practices that are leading toward extinction for the human race. We spent a few hours every morning working in the fields, and many slept in tents at night, reflecting our intention to be closer to the Earth as we listened for divine guidance about how to help turn around the self-destructive “progress“ that has been leading to global warming.

We asked ourselves whether we were ready, collectively, to commit to giving up practices that perpetuate global warming. What were we ready to commit to? Would we stop flying in airplanes, driving cars, eating meat? Would we live collectively, take public transportation, and use only renewable energy to heat and power our homes? Some individuals and couples in the group had already made some of these commitments, while others were slowly changing these practices. Yet others were agonizing over the difficulty of change and the culpability of maintaining the status quo. There was no sense of the meeting about a collective commitment. This caused great sadness and disappointment among some of the participants.

Later that night, after we recognized our inability, in the moment, to collectively commit to a significant change, I had a brief vision. As I lay down in my tent to go to sleep, I saw a black crepe armband tied around somebody’s arm, a traditional symbol of mourning. I remembered that the tasks of the prophets are two-fold. On the one hand, the prophet must mourn and critique the destructive nature of the status quo, and on the other hand must remind people of God’s steadfast love and desire to guide humanity toward a hopeful future. As I lay in my tent, I saw the color red.  I wondered why.

After I shared this vision with the group in the morning, some of us felt a leading to wear armbands, as symbols and reminders of the dangers we face, and of the hope that exists.

During my bus ride home, I began to visualize a red armband with a gold ribbon around it, topped by an image of our beautiful Earth.

Red to symbolize a Red Alert (a warning of the highest level of emergency, extreme danger).

Red to symbolize the intense heat of global warming.

Red for the forest fires that are raging.

Red for STOP! Stop extracting and burning fossil fuels; STOP the culture of materialism that is oppressing the earth and all of her inhabitants.

A Gold ribbon to symbolize the Presence of God in the midst of all of this, ready to teach and guide us directly.

A Gold ribbon for the Inward Light shining in everyone and in all of God’s Creation.

Gold for the possibility of a hopeful future if we change our ways.

I have sewed a prototype of the armband I envisioned and have begun to wear it. I wear it first of all as an ever-present reminder to myself. Next, as an opening to conversation with others. The other night when guests came over, it was easy to explain what the armband was about for me. Now I have begun to wear it outside the house and because of it have engaged in talking with people about climate change and about the availability of God’s guidance.  Though it might not be easy, I feel that it’s a leading of the Spirit for me to do so. To wear this ever-present reminder, and to tell others what it stands for. To tell you, who are reading this blog post. 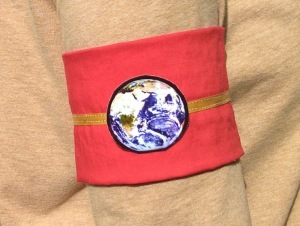 Red Alert for the Earth: What helps you keep in mind both the dangers we face and God’s readiness to show us a better way?

September 8, 2018 is a global Day of Action demanding real climate leadership. Rise for Climate is planning thousands of rallies in cities and towns around the world to demand that local leaders everywhere put life, people and justice ahead of profits for the fossil fuel industry. Click HERE to find a Rise for Climate, Jobs and Justice rally near you. Reversing climate change is the biggest right-to-life issue on the planet.

Our Life is Love: the Quaker Spiritual Journey, by Marcelle Martin, is available from Inner Light Books in hardback, paperback, and ebook. An excerpt and a study guide are also available on that website. Reviewed by Friends Journal, the book was designed to be a resource for both individuals and groups to explore their own experiences of ten elements of the Quaker spiritual journey of faithfulness.

12 Responses to Red Alert for the Earth